Please bring your empty plastic bags, berry boxes, plastic containers or anything you think we might be able to re-use and leave them at your pick up site on Wednesdays. Thank you for helping with our recycling effort!


Pete's Musings
Nutsedge. A word that strikes terror in the hearts of farmers everywhere. It is a sedge, basically a shiny grass like plant that forms little nuts underground. It is very difficult to control once you have it and it was here when we arrived at this farm five years ago. The little nuts grow new plants and can lie dormant for months or years. 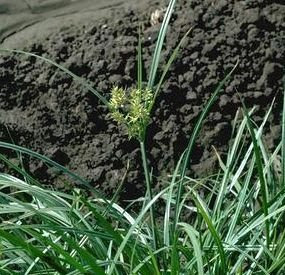 Our problem has increased over the time we have farmed here as we did not understand the plant and have a good control plan. Apparently there is no satisfactory herbicide control for nutsedge so it can be a real problem for conventional farmers as well. This year we are making progress. Our new cultivation plan is disrupting it at all stages of growth and we are seeing excellent control in some areas. In other places because of the crops that are growing there we are not able to use the best nutsedge killing cultivators and we are having some problems.
The real solution is to not grow crops on infested fields for a year and through a combination of cover crops and frequent turning of the soil starve the nutsedge to death. It can only survive so long without photosynthesizing. We are planning to plow 10 acres of land up the road a couple miles in order to take a chunk of ours out of production next year. Hopefully this will allow us to clean up the nutsedge once and for all.

Localvore News
We have eggs from Pa Pa Doodles Farm again today (you can expect them just about every other week throughout the share). This past weekend Deb and some folks from the farm were having a cook-out behind her house and suddenly, hearing the voices and merriment, all 300 hens rounded the corner of the house and joined the party looking for treats.

Elmore Mtn Bread has baked us their Pain au Levain this week. This is a sourdough loaf made with bread flour, rye flour and whole wheat flour from La Meunerie Milanaise in Quebec, spring water and sea salt. It is a universal bread that makes delicious sandwiches and toast, is good with strong cheeses, dunked in soup, or enjoyed on its own.

The Sesame Soy dressing included in the share is a new product that Vermont Soy is trying out. The is the second time they have made it for Good Eats and they and we are very interested to hear your feedback. This light and creamy dressing is made using fresh mint, Baked Maple Ginger Tofu, garlic, tamari, toasted sesame oil, sunflower oil, apple cider vinegar and water. Drizzle it onto a salad or into a sandwich or wrap, set it out as a veggie and cracker dip, or apply it as a sauce over pasta or rice. All of the ingredients are organic. If you have feedback, please email Vermont Soy, they'd love to hear it.

Last Friday morning I hopped into the Pete's Greens truck and drove North from the farm across the Canadian border and into some beautiful Quebec countryside. North of Rt 91 the Quebec landscape is a continuation of the rolling hills and intermittent green fields of the NEK. But where farms in the NEK open up between patches of forest to maybe a few hundred acres of open tillable land, the QC side has larger tracts of more than 1000 acres of open land, more conducive to growing grains. I rumbled through the last small town and then turned up the dirt road to the farm and The Golden Crops grain mill of Michele Gaudreau set amidst fields of spelt and soybeans. 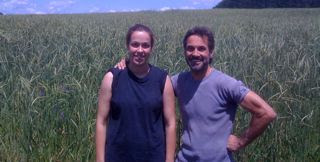 Michele and his family (Michele and his daughter pictured here) have 300 acres planted to various organic grains but his mill supports the efforts of many other organic grain growers in the area. Oats, barley, flax, wheat, rye, spelt, soy are some of the grains that are milled and bagged on site, and these are sold to organic retailers and producers in our region. Barley was being milled when I arrived, whole grains in one end and barley kernels out the other. After taking a mill tour, checking out the various grains, and sampling some roasted soy flakes Michele helped me load up the truck with oats (in the share today!), pearled barley and flax seed, and I was back out on the road. Stay tuned for stop #2 - Les Aliments Massawippi. 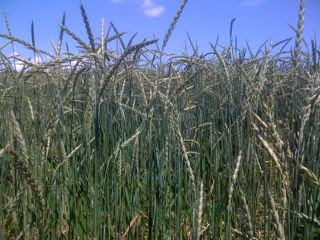 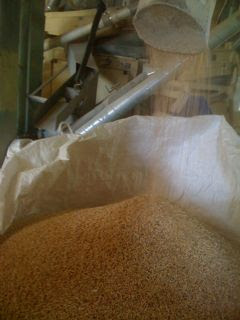 Granola
In honor of the oats this week I thought I'd share this recipe. I make this granola practically every week because everyone in my family eats it nearly every morning. One of my kids likes it dry, another with milk, and another with yogurt. I like to mix it with other cereals or fruit. We eat it for dessert on maple syrup sweetened yogurt. It's a solid, simple granola recipe. You can add as much as another three cups of various nuts or dried fruit without having to change the amounts of oil and sweetener. You can swap honey for maple syrup interchangeably and use other mild favored oils. Though the amounts given of sweetener and oil are what my family enjoys, you can reduce the oil to 3/4 cup and the sweetener to 1 cup.

Mix everything together well. If your honey is solid, put the oil and honey in a small saucepan first and warm on the stove until it becomes liquid enough to mix with the other ingredients. Put all of this in two 9" x 13" pans or a large roasting pan. Put in a preheated 250 degree oven and bake for a total of 70-80 minutes, stirring the granola at 30 mins, 50 mins, 60 mins, and 70 mins taking care to rotate the granola that is on the sides and bottom to somewhere in the middle. It is done when it is golden brown. After it cools completely, store in a tightly sealed container.


Basil Cream Pasta
A very rich and decadent creamed pesto adapted from the Horn of the Moon cookbook. This will probably work just as well with half the cream of you are counting calories. I have a hard time sticking to recipes and I would have to add some sauteed peppers and zucchini from this week's share to this recipe.

Start your pasta water boiling and prepare your pasta, cooking to al dente.

Meanwhile, put 1/4 cup of oil with the garlic in a blender. Run on low speed , slowly adding the basil leaves and the rest of the oil alternately until you have a fine basil paste. Set a small saucepan over low heat. Add the cream, basil paste, and 3/4 cup Parmesan along with salt and pepper. Heat until the sauce is just hot.

After draining the freshly cooked pasta, pour sauce over the pasta, toss well and serve garnished with the remaining parmesan.

Coconut Vegetable Curry
This is one of those recipes which you can swap vegetables in and out of with reckless abandon. It will all taste good. Serve with a side of rice and double it for leftovers!

Directions:
Blanch the snap peas, carrots and potatoes until tender-crisp in plain boiling water. Drain and rush under cold water to stop the cooking. Drain again.   Combine the Coconut-Curry Sauce ingredients. Taste and adjust the sugar to your liking.   Heat a wok or wide skillet over high heat until hot. Add the oil, swirl to glaze the pan. Then add the onions and bell pepper and stir fry for 3-4 mins until tender-crisp. Add the blanched vegetables and toss to mix.   Stir the sauce and add it to the pan. Bring it to a simmer, tossing to combine. Stir the cornstarch mixture to recombine and add it to the pan. Stir until the sauce turns glossy, about 10 seconds (a bit longer if you are doubling the sauce).   Add a drizzle of sesame oil and toss to mix, then serve alongside rice.

Scallion Pesto
Try making some scallion pesto and using it with different dishes this week. It could be used as a pasta sauce (blend in some tasty hard crumbled cheese), but would also be nice on fish, or mixed with mayo for a sandwich spread. Using less oil will result in a thicker pesto, one that can be formed as a garnish. Using more oil will result in a more sauce like pesto. I had some this week mixed with blue cheese on pasta. It was pretty darn good.

Chop the green onions roughly and toss into the blender along with the nuts, the garlic and the lime juice. Turn on the motor and drizzle in the oil until the desired consistency is reached. Season to taste with salt

Roasted Summer Vegetables
This is a great simple dish to serve on it's own or alongside meat or with bread or rice or couscous. Other vegetables work well too - fennel, young beets, salad turnips, garlic, etc.

Preheat the oven to 450 degrees. Put the squash, onions, potatoes, and carrots in a roasting pan and toss gently with the oil, coating all vegetables well. Season with salt and pepper. Put the pan in the oven and bake for 4-5 minutes. Remove the pan from the oven and stir ingredients. Return pan to the oven and continue this process until the vegetables are fork tender, 15-20 minutes. Approximately 5 minutes before the vegetables are done, add the tomatoes.
Email Post 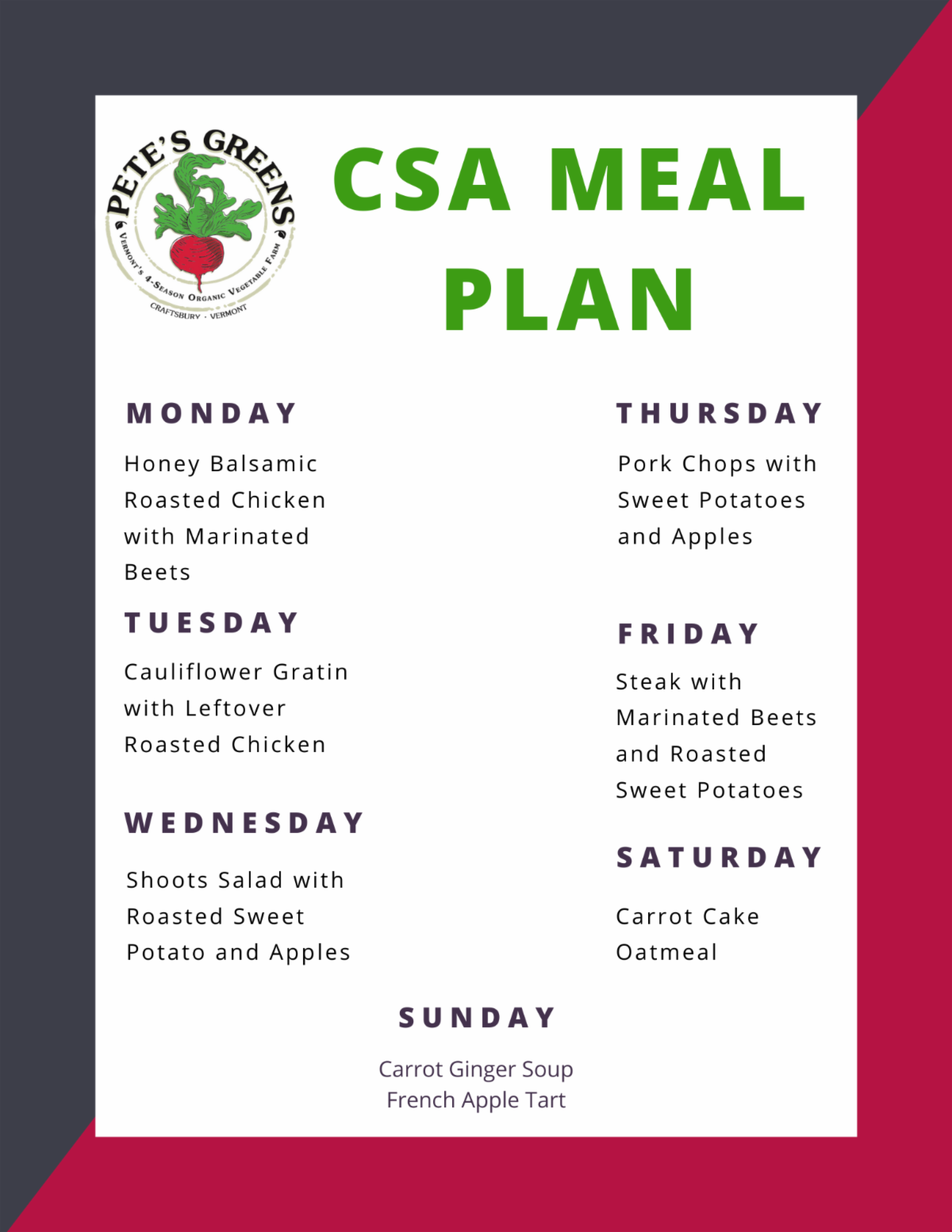